A veteran member of pop royalty, the incomparable Elton John brings his Farewell Yellow Brick Road Tour to Oracle Arena on Friday 18th January 2019! After five decades of spectacular shows and hit singles like "Candle in the Wind", "I'm Still Standing", "Tiny Dancer" and many more, John is retiring from life on the road, and will be marking the occasion with this sensational, unforgettable event! Don't delay – tickets available now!

“It’s time to come off the road so I can fully embrace the next important chapter of my life.” – Elton John 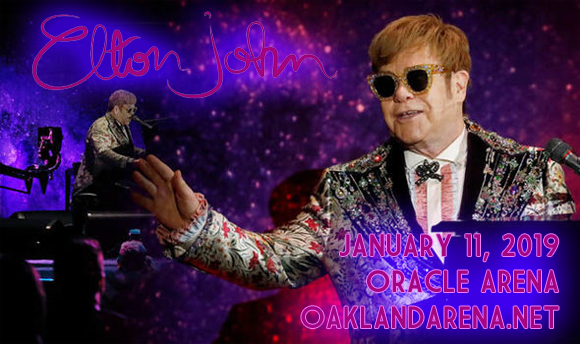 English singer, pianist, and composer Elton John is one of the world's best-selling artists, having sold more than 300 million records throughout his five decade career. He is best known for his work with long-time lyricist and songwriting partner Bernie Taupin, who he worked with since 1967 and has collaborated with on more than 30 albums to date. John has had more than fifty top forty hits, including nine Billboard 200 number-ones, and has charted seven consecutive number-one US albums. For thirty one consecutive years (1970–2000), he had at least one song in the Billboard Hot 100. John's tribute single rewritten in dedication to Diana, Princess of Wales, “Candle in the Wind 1997”, is widely regarded as the best-selling single of all time, having sold over 33 million copies worldwide, and is the best-selling single in the history of the UK and US singles charts. A highly-awarded artist, throughout his career he has received five Grammy Awards, five Brit Awards – winning two awards for Outstanding Contribution to Music and the first Brits Icon in 2013 for his "lasting impact on British culture", an Academy Award, a Golden Globe Award, a Tony Award, a Disney Legends award, and the Kennedy Center Honors in 2004.