A truly iconic rock band and one of the world's best-selling acts, Kiss comes to Oracle Arena on Monday 16th September 2019 on the One Last Kiss: End of the Road Tour! The Rock and Roll Hall of Famers will be performing all their classic hits in this electrifying show, giving fans one last opportunity to experience all the wildness of a live Kiss performance! Don't delay – tickets will sell out quickly! 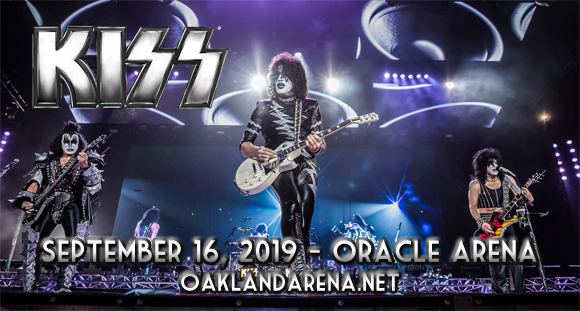 American rock band Kiss was formed in 1973 in New York City by Paul Stanley, Gene Simmons, Peter Criss, and Ace Frehley. The group soon gained recognition for its larger-than-life live performances that involved dramatic face paint and clothing, as well as flamboyant production, often including pyrotechnics. Their self-titled debut album was released in 1974, but it was Alive! (1975) that brought the group into the public eye. Today, Kiss has sold over 100 million records worldwide, including 25 million RIAA-certified albums, making the group one of the best-selling bands of all time. The group has incurred several line-up changes over the years, and between 1983 – 1995, the group stopped performing in costume and makeup, but returned to form in 1996 when the band's original members reunited. The band has been inducted into both the Hollywood Walk of Fame (1999) and the Rock and Roll Hall of Fame (2014).