Rapper-singer Post Malone is currently one of the hottest names in the rap game, and he's coming to Oracle Arena on Thursday 14th November 2019 on his Runaway Tour! The chart-topping hip hop star has been continuing to release hit after hit since last year's sophomore release, Beerbongs and Bentleys, and fans are looking forward to hearing brand new material from the multi-platinum-selling emcee! Joining Post Malone as special guest support acts will be Swae Lee and Tyla Yaweh! 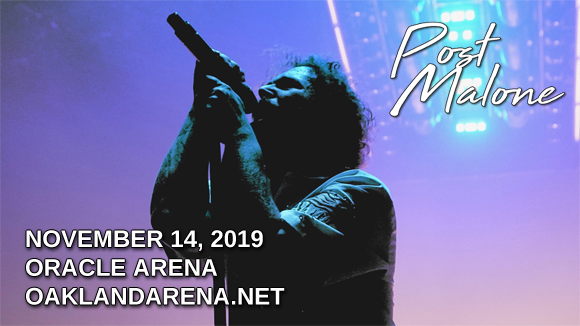 Finding instant success in 2015 with the release of his debut single "White Iverson", American singer, rapper, songwriter, and record producer Post Malone has sold over 90 million records to date. "White Iverson" was a top 20 hit on the Billboard Hot 100 and led to a record deal with Republic Records. Stoney, his triple-platinum-selling debut album, was released in 2016 and peaked at number four on the Billboard 200, launching several hit singles, including "Congratulations", which was certified diamond by the RIAA. His follow-up, Beerbongs and Bentleys (2018), debuted at number one on the Billboard 200, and broke several streaming records upon release, launching the number-one singles "Rockstar" and "Psycho". It led to four nominations at the 61st Grammy Awards, including Album of the Year and Record of the Year.