You heard right!! Get ready for show of the year: rock veterans Weezer and Pixies join forces once again in 2019, coming to the Oracle Arena on Wednesday 10th April!! Free shipping and no service charge on all orders – there’s no excuse to see two of your favorite bands of all time LIVE in one night!! Don’t delay – grab your tickets to see Weezer and Pixies today!! 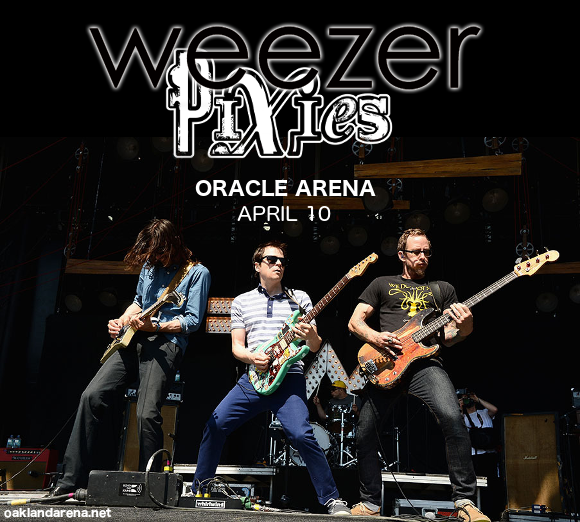 Currently formed of Black Francis, David Lovering, Joey Santiago, and Paz Lenchantin, the Pixies helped to define the sound of a generation with their punk and surf rock influences in the 80s, influencing the likes of Nirvana, Bush, Blur, Radiohead, and, of course, Weezer! The Pixies will be touring with their most recent work, 2016’s “Head Carrier,” their first album in full to feature new bassist Paz Lenchantin.

Weezer fans can look forward to sneek peeks of all-new material, with the much-teased self-titled “Black Album,” promised to be out soon. The band have set the ball rolling with one of their typical comedic videos, this time starring Pete Wentz of Fall Out Boy. Watch the video below – but don’t wait about too long to get tickets, they won’t last!!